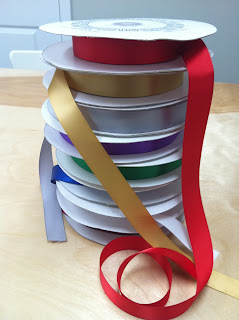 I use a lot of ribbon! There are so many projects that need ribbon, and because I use simple tissue paper to wrap gifts, I like to use nice satin ribbon when I can to embellish the packages.
Read more »
Posted by J. Dix at 9:16 PM 1 comment:

There's so much going on right now and it's difficult to keep up with my photo-taking.

This week I posted my first journal entry with myself as the subject. I originally thought that I couldn't be in this journal because I'm trying to capture my surroundings. I decided that since I cut my own hair that day, I looked at myself quite a bit in a mirror, and therefor, I kind of became my surroundings during that incident. I'm going to try to be a little more loose with self-imposed rules.

I'm thinking things through too much (as always).

My son went to two birthday parties these last couple of weeks and I had the opportunity to make two gift tags. Fortunately, both parties were for little girls who have given my son the nickname "Pineapple,"  so my idea was to make pineapple gift tags to attach to each girl's gift. This idea might also work for a luau-themed party or for someone getting ready to vacation or move to somewhere tropical.

It was difficult to cart my phone around a water park. I need to come up with a better way to protect my phone.

I've been asked why I sometimes break into Haiku. Well, I do it for a few reasons.

The first is because sometimes I think it's funny. There's something about taking a form of poetry that is supposed to be so deep and introspective and applying it to the daily chaos of a family with two kids under seven that makes me laugh...

I'm trying my best to be accepting of the fact that not all photos will be good photos. This is okay. I will not shrivel to nothing if people see that I am not as perfect as I would like to appear. And some days, I just have one photo to choose from. Even if it sucks, it's going to be put up here.

Creative Spotlight : Between The Folds

“Much of the beauty that arises in art comes from the struggle an artist wages with his limited medium.”- Henri Matisse


The other day, I watched the documentary "Between the Folds" and I was absolutely blown away.

"Between the Folds" showcases the art of origami. The idea is simple: create a sculpture by manipulating a flat piece of paper. In origami, no cutting and no glue are allowed. And although I remember a student teaching me to fold a simple crane in elementary school, I had no idea how far the art of origami has come!

The documentary did appeal to my scientific side -- I did major in Chemistry after all -- but I think what impressed me the most was the sheer tenacity of most of the artists (scientists?) featured. An artist would fold a subject repeatedly until the desired affect was reached because the artist could see that it was possible. And I was so inspired by the scientist Dr. Erik D. Demaine who explained the reasoning behind his fascination with folding paper. It was simple to him: folding paper was fun. The math was fun for him, but the art was fun, too. And that was what has driven him to be one of the most brilliant minds of our time.

Watch the documentary and be inspired to follow your passion...

Saturday's photo is one of my favorites so far. My son tossed me a ball and it bounced off my hand and into my wine glass on the table. We both started laughing so hard that I had to take a shot of the aftermath. I personally love the layers created by glass, light, and reflection. Maybe I also loved how hot it was after so much cold weather. Too bad it snowed four days later. Crazy weather!